In January 1970, occupying prefabricated buildings in the grounds of Northcliff High School, a primary school which would become Cliffview Primary School was born. 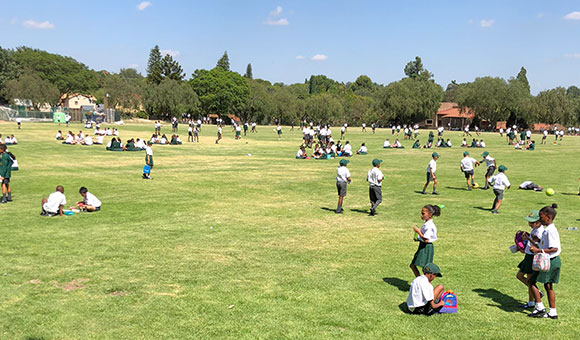 194 pupils were catered for at what was then called Northcliff Second Primary School by an Acting Principal, Mr. T Skinstad, 5 teachers and 1 secretary. At the first P.T.A. meeting of the new school, the parent body decided that the name should be Cliffview Primary School.

A year later, Mr. W G Dennler assumed duty as Principal and in the first term of 1973, the school moved to permanent premises in Norman Drive. The buildings were officially opened in October 1973 by which time the staff had grown to 10 teachers and pupil enrolment to 304. From those small beginnings, Cliffview Primary School has grown and developed to what it is today.

In 1983 Mr. J C Vorster took over as Principal with a staff of 22 educators and 3 secretaries. Mr.Vorster left the school in February 1997.

Mr. G.P. Hebert, took over as principal in July 1997 and retired from the GDE, leaving Cliffview Primary school on the 1st May 2006.

Mr D. Shead took over as Principal in January 2007, leaving Cliffview Primary school at the end of 2012.

Ms R.Y. Reddy took over as acting Principal from 1 January 2013 and was appointed by the Gauteng Department of Education as Principal, effective July 2013. Ms Reddy is supported by 5 administration staff; 5 ground staff, 41 educators; 5 Project Homecoming staff and 10 educator assisstants.

The school currently has some 986 learners.

Cliffview Primary School is proud of its history of service to the community. Since 1970, it has grown and developed. It offers a sound academic education provided by a well qualified and competent staff as well as a wide range of extra-mural activities which offer pupils opportunities to participate in sporting, cultural and academic activities.